Hi there!
The 2 Chaos Sorcerers which I bought from an user on gw-fanworld.net arrived by today's post and immediately went into a bowl with ethyl alcohol because they're looking really bad and are very thickly covered with paint. 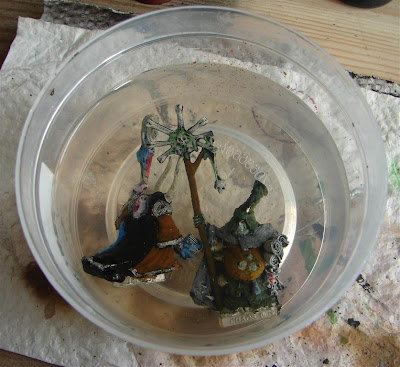 Furthermore, I can tick off one point on my to-do list: 2 two Guardsmen with Lasguns 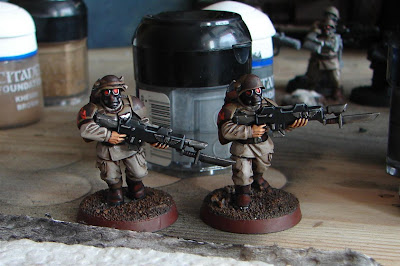 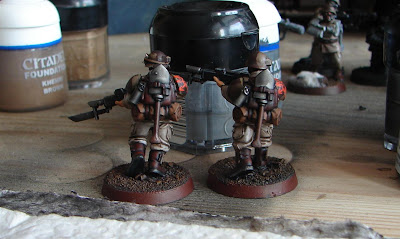 To simplify matters I'll  add the snow on the bases when all the infantry is done
Eingestellt von Stempe um Tuesday, November 30, 2010 No comments:

Well, my IG project draws to a close and I have only very little to do until the army's finished:

The Guardsmen are already assembled and wait for their paint. The Medusa will be a commission work done by *cyberdippi*, a very talented scratchbuilder from Germany and I'm really looking forward to hold the tank in my hands and even more to paint it. It gonna be a re-build of Forge World's Armageddon Pattern Medusa with the enclosed cabin. The interior room will be trimmed with the Renegade Artillery Crew:

The Battle Psyker Squad willconsist of several Chaos Sorcerers from Games Workshop (click, click and click) and the two Apostate Preachers of Nurgle from Forge World.

I must take these beautiful models for my Battle Psykers, otherwise I wouldn't habe any fun with playing that unit. Previously, I used  my Penal Legionnaires and as they aren't that nicely painted I rarely played a Battle Psyker Squad - too bad, as it's the best Elites choice of the Codex IG in my opinion.
Eingestellt von Stempe um Sunday, November 28, 2010 1 comment:

I repainted these some weeks ago and magnetized their arms.

Every of my armies has its own mission objectives. Here are 5 for my Defenders of Vraks.

Today I present you my latest built and painted model: my Straken-count as "Kronos the Blood Drinker"

After regarding Straken's profile and getting a thought-provoking impulse from Goatmörser, I decided to take a World Eater Champion for the count as. What would be more nearby than that in a renegade army with many soldiers dedicated to Khorne?
Eingestellt von Stempe um Friday, November 26, 2010 No comments: