Yes, we do! With their 4 pts. per model and a option to buy a heavy stubber or flamer for only 5 pts., these crazy fanatics are a quite nice element of the new Codex in my eyes.

Last Saturday, two club mates and I have been to Ingolstadt on a 200 pts. Kill Team tournament. This is what I played:

I won three times, had a draw and a loss once each. Overall, that got me the 2nd place in the torunament. I also won a medal for the best specialist conversions.

Here's the enemy's pain in the ass, the heavy stubber with BS 4: 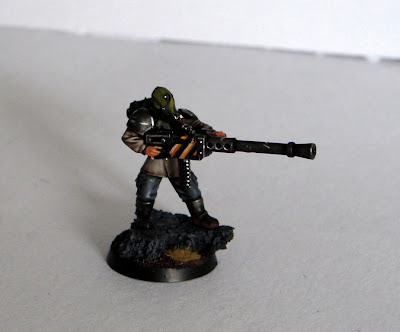 There have been so many wicked moments during those 5 games, but I'll only tell you about the most extraordinary one: a cultist smashes the curcuits out of two Praetorians of the Necrons in close combat (T 5, so he'd only wound them on a 6!) - they would never again stand up. And in the last turn, he's assaulted by a third one and survives the close combat, so the Necrons do not get hold of themission objektive next to him. So to say, he killed 40% of the enemy's army. What a true Champion of Chaos! I hope the Dark Gods observed him. As my personal reward, I granted him a trophy rack of his own: 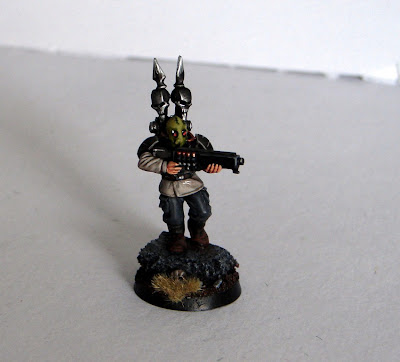 Furthermore, along with the last Daemons of my current commission army and a Khorne General on Juggernaut, I have these two hot WIP cultists on my painting table: 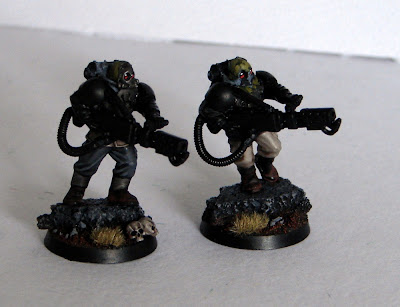 It's always fun painting some of these lunatics. And I can happily say I still have bitz for about 20 of them.

Labels: Iron Warriors, The Lost and the Damned, Tournaments