Blood Letters - Step by Step I

As Major Tom asked me to take pics of the several steps of painting the Blood Letters (especially how I airbrush them), I decided to make a little tutorial about it.

After assembling the minis and checking again for mold lines I used Vallejo Model Air (VMA) White and applied two layers via airbrush. But let the minis dry some time after the first layer before you apply the second one! 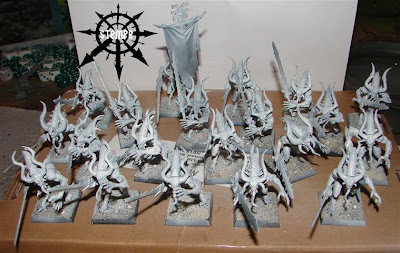 After the second layer of white primer has dried, I used Vallejo Game Colour (VGC) Scarlett Red. As it is not designed for usage via airbrush, you have to dilute it either with water or with special airbrush thinner (e.g. Vallejo). I used water.

Then, I applied the colour on the Blood Letters so that no white can be seen anymore on the "flesh areas" once finished. 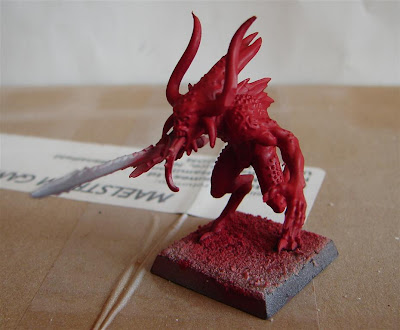 After half an hour or so in a well aired room you can proceed with airbrushing. This time, I used VMA Scarlet Red. Although it nearly has the same name as the Vallejo Game Colour I used previously, it is slightly brighter.

Hold your airbrush in a ~45° angle and apply some of the red so that only the areas that can be seen from above are hit by the colour. That'll create some highlights as the darker red will remain in the "shadowy" areas. Do so from all sides, i.e. rotate the mini by 360°. 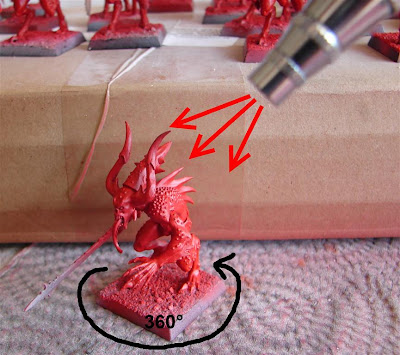 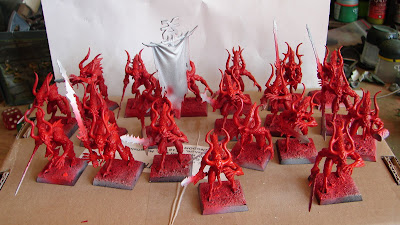